I recently read that Indian pipe isn't commonly seen. I wonder, I thought to myself: Is that why I get so excited when I see it? 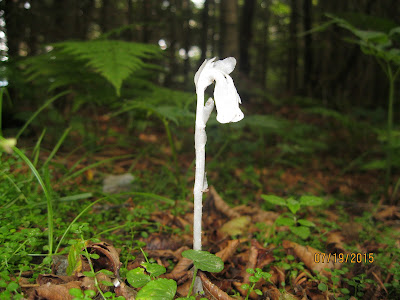 I shook my head. Nah. In truth, it’s rare that I take a hike without seeing these exquisitely ghostly flowers, standing four to ten inches high, singly or in clumps, on the shady forest floor. I think I get excited about them because ... well, they're just cool.

Indian pipe grows primarily in summer, but its appearance and nicknames are more likely to conjure up images of Halloween: ghost plant, ghost pipe, dead man's fingers, fairy smoke, corpse plant, and, in the words of one imaginative childhood friend, ghost-flower. 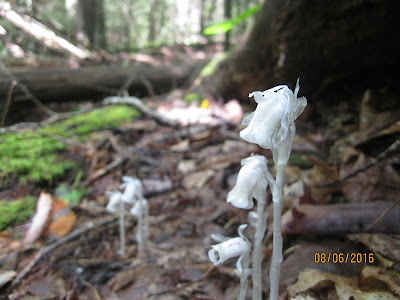 Although it looks and acts more like a fungus (a saphrophyte, it lives on dead or decaying organic matter), Indian pipe is a wildflower, its single flower the nodding, open end of the “pipe.” When it fruits, the flowers turn upright. Unfortunately, I don’t have a picture of an upright Indian pipe, but I do have this image of a related flower Monotropa hypopitys, commonly known as pinesap or Dutchman's pipe: 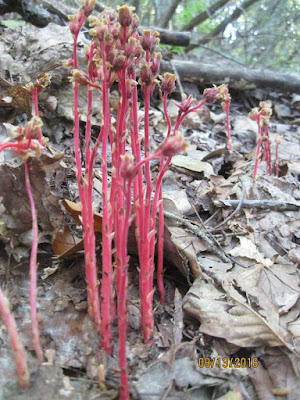 Pinesap is an interesting plant in its own right, and I'll be writing more about it in a future post.

Indian pipe produces no chlorophyll, which is why it isn't the familiar green of most plants. It doesn’t require leaves; its “leaves” are scale-like structures along the stem. 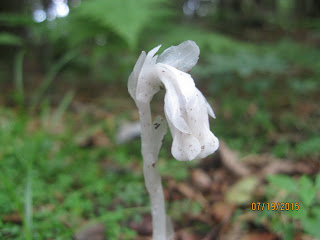 It doesn’t have to make its own food; like fungi, it gets its food from elsewhere, benefiting from the symbiotic relationships between mushrooms and trees. In this relationship, mycorrhizal fungi typically attach to tree roots via mycelial cords. Through those cords, the trees provide the mushroom with sugars and other nutrients from above, and the mushroom provides the tree with minerals from below. The Indian pipe reaches its own little roots into those cords and takes nutrients--both sugars and minerals for itself.

If all those nutrients were emails going back and forth from fungus to tree, then Indian pipe is the hacker who taps into the line. Or whatever hackers do to access other people's information.

If I were the tree or the mushroom, I'd be pretty mad, but neither seem to mind, as far as anyone can tell. We don't know who all of these good-hearted forest-dwellers are, but we do know of one mushroom family that doesn't seem too bothered by its Indian-pipe parasites: Russulaceae, which includes Russula and Lactarius. These mushrooms have mycorrhizal relationships with various trees, mostly oaks, but also including pines and American beech.

I’ve only recently taken a big interest in mushrooms (beyond just marveling at how cool they look) and have started taking note of their caps, gills, width, length, and habitat, among other things. Still, I've yet to notice whether certain types of mushrooms grow in the vicinity of Indian pipe, or whether Indian pipe grows near only certain types of trees. I think I have a few Indian-pipe–hunting expeditions ahead of me, and I’ll be sure to report anything new (to me) that I observe here! 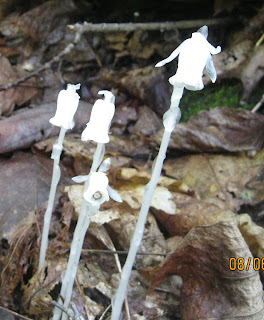 The Indian pipe has an interesting name. Its scientific name, Monotropa uniflora, literally means “one turning, one flower.” I’m not sure whether the “turning” is meant to refer to the single turn of the stem a the flower; the fact that, in a clump of Indian pipe, all the flowers nod in the same direction; or the single turn from nodding to upright that occurs in fruit.

The common name, Indian pipe, refers to its appearance, which is similar to that of the Sacred Pipe, or “peace pipe” used by many Native American tribes. There is a Cherokee legend about the Indian pipe that says the flower came into being as the result of selfishness: tribes didn’t want to share their fishing and hunting grounds, so they quarreled. The chiefs came together and smoked the Sacred Pipe, but the tribes continued to quarrel. This displeased the Great Spirit, as the Sacred Pipe was only supposed to be smoked once peace was achieved. As a result, the smoke hung over the Cherokees’ mountains—known by all as the Smoky Mountains—and the old chiefs were turned into the colorless Indian pipe. 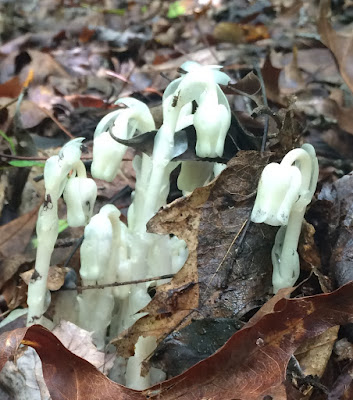 Monotropa uniflora is known to have some medicinal qualities. Native Americans used it to treat sore or inflamed eyes and for general aches and pains, but it is somewhat toxic. You can read about its medicinal uses all over the Internet, but I think I’ll pass on this one. Visine and Advil for me, please!

When and where can you find Indian pipe? Well, in the southern Appalachians, of course; as I mentioned previously, I see it nearly every time I hike, regardless of the season. It’s primarily a summer wildflower, flowering from early summer to early autumn. It grows in most parts of North America, excluding the desert southwest and the central Rockies. You can find it growing in Canada as well, though it’s not considered common in most places. It’s usually white, but keep in mind that it sometimes has black flecks or a pale pinkish hue.

For my next Indian-pipe sighting, I’m planning to take more pictures (of course) and to notice more about the area these ethereal flowers inhabit—including the trees and any nearby mushrooms. If you’re reading this and have seen Indian pipe on your hikes, please let me know in the comments. I’d also love to know what time of year it was and where you were hiking.