On Monday's walk, a brief stroll around a park, I started using my MapMyRun app again.

And then last night was a three-miler in my neighborhood. For the three-miler, I pulled up an old Spotify playlist titled "Brisk Walk." And man, was it a brisk walk! I covered the first mile in just over thirteen minutes! With that playlist, I was able to walk three miles in less than and hour and get back to the house to spend quality time with my family.

Of course, I'd love to start running again, or at least jogging, but it will still be a while before I can do that.

So, there's my update. Not much to tell, but it's nice to be able to share news that I can walk normally again!

In case you're interested in a 13.5-minute mile, click the image below to see some of my "brisk walk" songs! 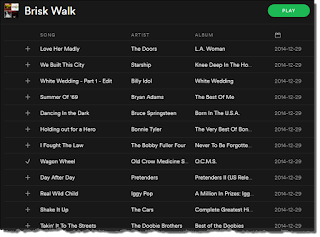 Email ThisBlogThis!Share to TwitterShare to FacebookShare to Pinterest
Labels: fitness

Yellow Jackets ... and Some Mushrooms

Yesterday morning, as I went to rock-hop a small, flowing stream, I suddenly felt tiny needles sticking into my skin. Bees! I thought. I began running and yelling as the stings continued to come. My husband remained on the other side of the creek, and by the time I stopped a quarter of a mile later (I'd tried to stop a few times but was still surrounded by bees), I started to think the worst. Did he fall into the creek? Perhaps he got stung and had an allergic reaction?

I slowly began to walk back toward the stream. He finally came around the bend, sting free, but worried about me. The bees were still following us, so we didn't stop to talk but waited instead until we got to a campsite another half-mile down the trail.

We were next to a cold stream, so I grabbed a bandanna, wet it, and put it on my stings. It felt heavenly. But then Dan started yelling and waving his arms. More bees! We raced out of the campsite and back down the trail. Finally, a mile and a half after we first encountered the bees, we were able to stop. One of the evil insects was on my shoe, and Dan identified it as a yellow jacket--not a bee at all, but something much more sinister.

We eventually counted my stings: twelve. Eight on my legs, two on my right hand, one on my stomach, and one on my back.


We still had five miles to hike, and I wasn't about to go back the way we came, so we kept hiking. It turned out to be a nice hike (despite the severe pain of the twelve stings I got). We didn't get many pictures because we didn't have a lot of time--I had to be at a meeting at 2:00 that afternoon. But we did get a couple.

The yellow jacket attack qualifies as being one of my worst hiking experiences ever. It's now a day later and the stings are hot, red, swollen, and itchy. I'm taking lots of Benadryl and also putting ammonia on the stings, which seems to help with the itching (even if it does make me smell like a nursing home).

According to Seattle Children's Hospital (and many other sources), "Severe pain or burning at the site lasts 1 to 2 hours. Normal swelling from venom can increase for 24 hours following the sting. The redness can last 3 days and the swelling 7 days."

So it's not over yet. The swelling has definitely increased over the past 24 hours, so I'm hoping it will level out soon (and it will, if it's normal). I'm very thankful that I didn't my daughter with me, and that I'm not severely allergic. I'm aware that people can die from yellow jacket stings, and I'm grateful to still be here!
at August 29, 2016 2 comments:

Here are some photos from our recent hike in North Mills River (8/27/2016). It wasn't a great hike for viewing mushrooms, as it had recently been logged (2014) and most of the trail was sunny and dry. Still, we got a few good pictures.

It's August 27, the day I celebrate my own little new year. It started in 1988, when I began my college career on August 27 at Tulane University. And then, 364 days later, I finished up my stint working at Yellowstone National Park. That year of my life was perhaps the most transformative, which is not surprising, considering I was 19 years old. But it seemed to neat and tidy, with college starting on the 27th and my Yellowstone life ending on the 26th of the following year. It was the end of a magical year for me, one that led me to the depths of depression and back again. I decided that, every year, I would quietly celebrate August 27 as a time of beginning.

And it made sense. For the next six years or so, I was either a college student or a grad student, and the "new year" always starts in late August if you're in higher education. Even after I left academia, though, I always had a special place in my heart for the new beginning offered by August 27.

So here I am, on August 27, thinking about new beginnings.

And Lord, am I in need of new beginnings, in so many areas of my life.

How cliché is that? It's the new year, and I want to get in shape. Well, of course. Doesn't everyone?

About a year ago, I decide to start running again, and I signed up for a November half-marathon. It felt so good to run. I have always loved running distances, and it wasn't long before I was running five miles, then six, then eight, then ten, then twelve ...

Something happened on one of those long-distance runs, though. I got a pain on the inside of my right knee that wouldn't go away. Soon after, I got an accompanying pain reaching from my left hip/butt around to my groin area. I quickly went from running ten miles at a time to barely being able to walk.

And when I say "barely," I mean it. I was using a cane to get around the house. In public, I hobbled everywhere, and it was torture just to go up or down steps. I couldn't run, I couldn't walk, I couldn't hike, I couldn't do much of anything. I went to an orthopedic doctor and got X-rays, but they couldn't find much of anything. I finally went to a physical therapist early this summer (after eight months of suffering), and it's been a slow recovery, helped much by a process called dry needling.

I'm still not 100% cured, and I think I need to see a manipulative osteopath before all is good, but the dry needling has allowed me to walk and hike again, if not run.

The upshot of all this? I haven't exercised regularly in nearly a year. I've lost quite a bit of muscle. I need to start exercising again. And what better time than the new year? So, for my first new leaf of the new year, I'm going to begin working out four days a week. I'll work my way up to more, but I don't want to push it.

It will be hard not to push it. I miss my buff self from several years ago.

It was a banner year for writing. I took a writing workshop last fall and submitted one of my stories to the Great Smokies Review. Not only was it published, but it snagged the Editor's Choice for Prose award. It's here, if you want to read it.

I also started work on a novel this summer, which went swimmingly until late June. For some reason, I have gotten away from it. It's not writer's block--I have the whole thing outlined. It's not lack of interest--I think about it all the time. But between working full-time, being a mom, and having a husband who isn't home much, I've just been too tired. Where I used to get up at 5:30 every morning to write, I just sleep until the last possible minute. Maybe it's laziness, or maybe I'm legitimately tired. Whatever the reason, one thing is true: I'm not writing.

I'm not sure how to work writing into my schedule. Mornings are best for me, but mornings are also best for exercise ... so there's that age-old dilemma of where to focus my early mornings. I suppose I can write three mornings and exercise four. I also can write during my lunch hour at work (if I'm not practicing piano), and try to snag a few hours on weekends. My resolution for this year is to start another writing routine and use it to finish the draft of my novel.

Oh, piano. Oh, George. I started taking piano again briefly earlier this year, but it didn't last. Again, life's other responsibilities--mainly working and being a mom--got in the way. I was practicing several times a week during my lunch hour at a local church, but I got away from that due to a series of crunch-times at work. I need to play, though. It keeps me sane, perhaps even more than writing does. So my new piano leaf is to practice during lunch three days a week, at minimum. I'm not ready to add piano lessons to that, I don't think, as both the time commitment and the financial commitment are a little out of my reach at the moment (particularly if I end up paying a new monthly fee for the health club).

Yes! Hiking! I have been hiking more. I want to hike even more than that, and I want to start backpacking again. I don't know how many miles I've covered over the past year, but I do know that I've hiked at least one weekend month this year, and some months I've hiked almost every weekend. We've also gone car camping several times--to several areas of Western NC, including Davidson River, North Mills River, and Linville Falls; and to Mount Rogers in Virginia. We currently have trips planned for Cades Cove (Great Smoky Mountains National Park) and Shenandoah National Park in the fall.

So, I don't need any big resolutions about hiking, other than hike more. I do plan to begin posting pictures of my trips here. I've been posting some of them on Facebook, but I'd prefer to include narrative for each, and that doesn't work so well in Facebook format. If you, my vast audience of three, like pictures of mushrooms, wildflowers, and the occasional mountain view, you're in luck!

In conclusion, those are my four areas I want to focus on in this new year: exercise, writing, piano, and hiking. All of that, of course, is in addition to mothering and working. Those are my two biggest priorities, which is a good thing--but at the same time, I tend to let them push some important "Waterfall" things out of the way. Let's see how much I can bring some of those things back in.