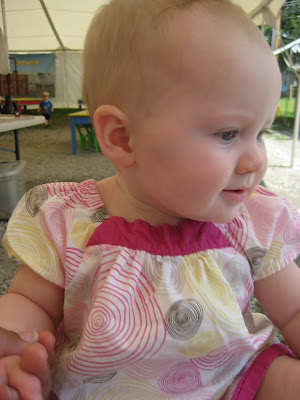 Notebook Addict of the Week

Who knew that there was a blog out there that declared "Notebook Addict of the Week" each week? Or that I would be selected for such an honor, based on an old blog post on my notebooks?

Notebook Stories is a blog about notebooks. If you're into spirals, moleskines, or anything in between, check out this interesting blog on the humble notebook.
at July 31, 2010 1 comment:

We think Miss Anne is a born hiker. Why else would she be walking at seven months?

Testing Out This Video Thing

I Write Like by Mémoires, Mac journal software. Analyze your writing!

Moving on, I entered a few paragraphs of a software manual that I wrote and got "Arthur C. Clarke."

Then I entered a few paragraphs of an e-mail I wrote this morning and got "Vladimir Nabokov."

I can't say much for the accuracy of the writing-analysis algorithm on the I Write Like site, but here's one thing I found interesting: I got a different writer for the different types of things I write. So maybe, just maybe, that reflects the fact that, as my purpose and audience change, I adjust my writing style accordingly--just as a good little professional writer should.

Or maybe the names of writers are generated randomly, and I'm the fool for reading in to it.

Still, it's kind of a neat site.

Here are some pictures that Angela (Anne's sitter) took of Miss Anne today while I was at work. 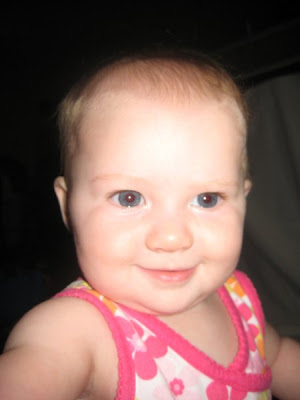 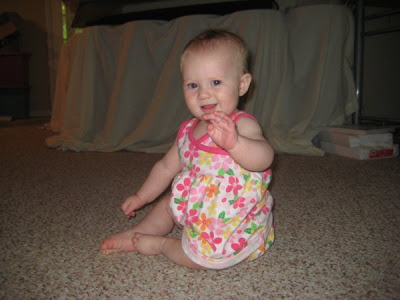 Doesn't it look like she's taking a picture of herself here? 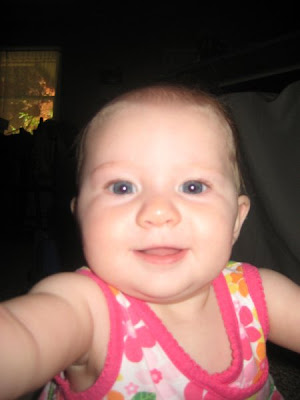 That's my baby, crawling across the floor! You can kind of see her tooth in this picture. 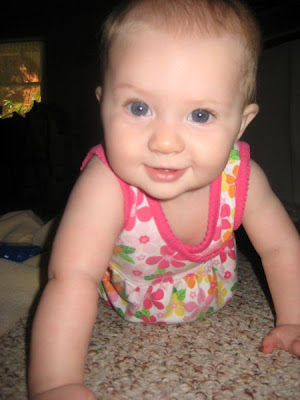 Yes, she's the spitting image of her daddy, minus the facial hair. 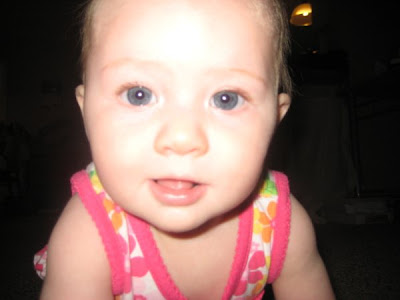 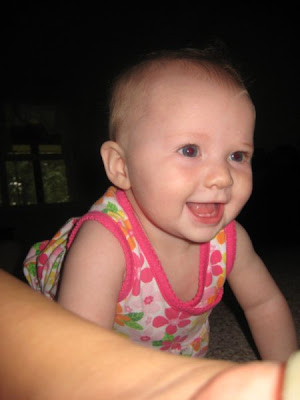 Miss Anne is crawling, pulling herself up, waving bye-bye, and trying to walk. She has a tooth. She still doesn't want solid food. She's light-years from where she was even a month ago.

Meanwhile, I'm so tired I constantly feel like I have "the shakes." I'm ready for my husband to come home from camp so I can get some desperately needed rest. Three more weeks.

Anne's new sitter is wonderful. She has been a real blessing.

So, I'll give you an update on Li'l Boo. I'll add pictures later, so check back.

1. Li'l Boo will be seven months old on Monday.

3. Despite her new tooth/teeth, Li'l Boo is not yet a fan of solid food. She's still on breastmilk almost exclusively. I've tried to give her solid (strained) food on several occasions (including every night for two weeks after she turned six months), but she is simply not interested. She makes a sour face and inserts her thumb into her mouth, as if to say, "No more." It's cute. I suppose I could force her to eat solid food, but I'm just waiting until she seems more interested.

4. She started drinking out of her sippy cup about a month ago. She loves water. Loves it, loves it, loves it. Perhaps she'll grow up to be like her mama and never go anywhere without a 64-oz water bottle.

5. She can crawl a foot or so. She's trying very hard to crawl.

6. She started pulling herself up to her feet (yes, that's the standing position) a couple weeks ago. I was shocked, as she's not supposed to be doing this yet. After I found her standing in her crib one night, we had to lower the crib. Standing! My Li'l Boo! Hard to believe.

7. She's also taking little steps if you hold her hands while she's standing.

8. Her favorite book is Where's My Sweetie Pie? by Ed Emberley. She loves books.

9. She still loves piano and plays every day.

10. Li'l Boo has the unladylike habit of spitting. "Blowing raspberries," it's called. It sounds like farting. She learned to do this a couple months ago, then stopped, then started up again last week. It's hilarious but very messy. I'm wondering at what age I should start telling her that isn't acceptable.

11. We have a new sitter! This woman is more of what I think of as a "nanny" than a sitter. She's wonderful. I think Li'l Boo misses her old sitter, but she loves her new one, too.

OK, so those are some of the highlights on Li'l Boo. I have a million pictures to download, but Hubster has the camera at camp, so I can't download 'em till this weekend. Sorry.
at July 08, 2010 2 comments: