Little Scout sure knows how to distract me from blogging (and house-cleaning, and piano-playing, and writing, and ...)!

Scout will be six weeks old on Saturday. My life is definitely different from what it was before; it's hardly recognizable. Gone is the independent Waterfall who makes such self-actualized decisions as, "I'm going to go to K-Mart now," and "I think I'll take a hot bath tonight." No more is the Waterfall of old, who took random walks whenever she felt like it, who reached for her cell phone when the spirit moved her, who scratched her itches whenever they itched.

Once cannot reach for cell phones that are unreachable if the baby is nursing. One cannot necessarily scratch itches if the itch is on the back of one's upper arm and the nursing baby is resting in the crook of the opposite arm.

And taking a hot bath? I can do that when Hubster is home. Sometimes. The other night, however, I accidentally filled the tub with cold water. And another time, I filled it too high and the hot water ran out and I ended up with a slightly-less-than-lukewarm bath. Sigh.

I love little Anne. She's a happy, healthy little one so far. She eats like a pig (a good thing when you're five and a half weeks old) and is growing her third chin already. She's crazy about her daddy, and I'm starting to think she likes me, too.

Here are a few pictures, for those of you not on Facebook:

First is my smiley girl. She typically looks like this when she wakes up in the morning. She still isn't smiling a lot, but we're seeing more smiles every day. 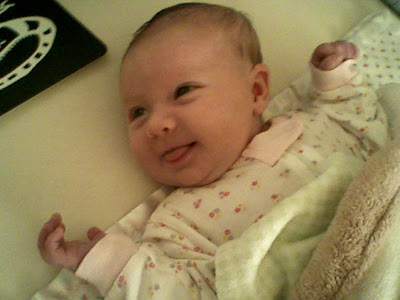 Here I am with Scout, a.k.a. Baby Anne. Poor, neglected George is in the background. 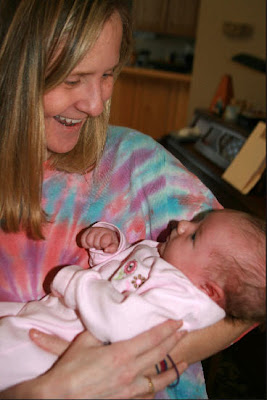 Baby reaching for my hair. She loves to grab my hair. Close-up of the little beauty. 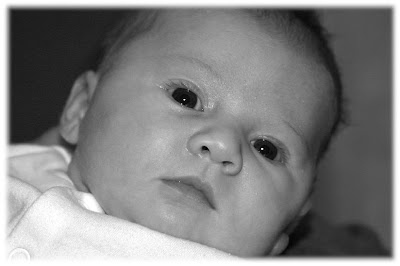 A hint of a smile: Many thanks to my friend Robbie for taking such great pictures of my little sweetie. Robbie took all but the "smiley" picture at the top.