Pictures? Of the New House?

Someone said they were waiting for me to post pictures of the new house.

No. I will not post pictures of the new house. But I will show you the gear room! The "gear room" is actually a one-car garage in the basement. Up until several weeks ago, it was the room where we put boxes we didn't feel like unpacking yet. Then we decided to make it a gear room. 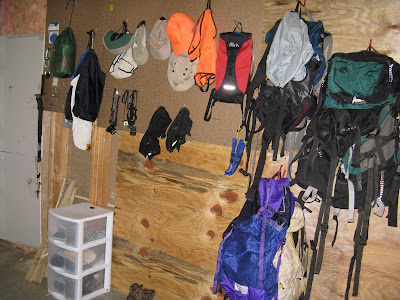 Hubster and I put the pegboard up there. OK, Hubster put it up there and I put all the little peg-hanger things in it. And hung stuff. It's so nice to think I will never have to wonder where I put my gaiters again.

That little white plastic cabinet thing contains water purification stuff, first aid stuff, and some bathroom stuff, including my trusty orange trowel. I've since hung the orange trowel on the pegboard. It doesn't deserve to be hidden away in a drawer. 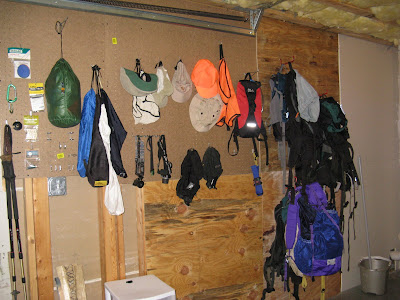 See my beloved Leki poles? They're right there in the far left of the picture. And there is the Leki pole and Therma-rest repair stuff! Who can ever find that stuff when you need it? And then our million stuff sacks! And headlamps! And non-lost gaiters! 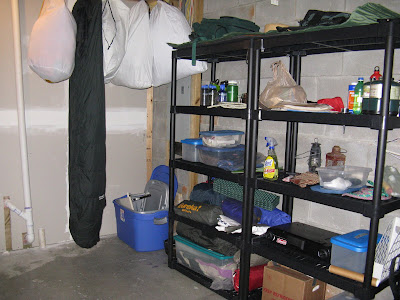 Those are sleeping bags on the left. Tents and sleeping pads on the bottom-left levels of the shelf. "Car camping" gear (mostly) on the right.

I hate car camping. I couldn't care less about the junk on the right. I have a genuine sense of fondness for the backpacking gear on the left.

At the top of the shelf are a couple of "picnic backpacks" that people gave us as wedding gifts. I honestly wondered if we'd ever use them ... and we actually do use them! Quite often, actually. Far more often than I imagined we would.

I love having a gear room. At our old house the "gear room" was half of a tiny closet, and everything was always a mess. And I could never find my gaiters. No more!

Another thing ... before we moved, it always seemed like we had too much gear. After all, it was constantly spilling out of that tiny closet. Now we clearly don't have enough gear. Heh. Just kidding. Though we could use a few more stuff sacks ...
at October 12, 2008

I love your organization. Outdoor/camping gear sure takes up a lot of room. We have a few shelves in our utility building for our tents, cooking supplies, sleeping bags etc. The only problem is the shelves are up so high that I can't access them without fear of it all tumbling down on my head.