It looks like "A Sort of Notebook" is an ex-blog. I'm not going to post a link to it because it's been taken over by spammers.

It's Saturday night and I love merlot. No, I'm not drunkly. I went to a 50th birthday party tonight and had two lovely glasses of merlot. Then we went to a toy store. (I should never go to a toy store after two glasses of merlot, and after running eight miles. I bought some yellow teeth, a remote-control fart machine, two crazy pencils, and a present for my future niece who has yet to be conceived.)

We went to an art gallery earlier that happens to have a grand piano and I played the Bach Prelude. Oh my, but it's sounding nice!

Deborah (my piano teacher) has a grand (I can't remember the manufacturer. Forgive me.) that she wants to sell me for $8,800, or $100 a key. Hubster thinks that's too much. I told him it's a steal--we get the pedals, and the wood, and the wheels, and the bench for free!

Lightning struck last night. It fried our computer, our television, our stereo, and our telephone. I was thrilled. We could finally get rid of the T.V. and replace it with a piano. An $8,800 piano. But no. Would you believe, Hub has already bought a flat-screen TV to replace it? Poor Hub. But at least he called and asked my permission. I said, "No, I don't want a T.V.," but then I said, "But I love my Hubster, and my Hubster loves college football. Yes, dear, go ahead and get the T.V."

I had a two-hour piano lesson yesterday. It was awesome. I was afraid it wouldn't be.

No practices at home either, because once I've run/worked out, I don't get home until after 8 p.m. And I'm exhausted by the time I've had dinner and a shower.

Work has been extremely busy, but in a good way. I'm enjoying the job. I can't say I love the job, but I like it. It's a paycheck, and it's somewhat challenging, and I work with good people. It's a good way to support my piano and writing habits.

I checked Sitemeter for the first time in months and see that my readership has dwindled substantially. I'm not surprised; I rarely update anymore. It's not that things aren't happening in my life, or anything like that. It's just that, when it comes to writing, I've been more interested in journaling, my novel, and (of necessity) my job.

But I'm going to update now, and it's partly because I know I have at least one faithful reader in Plaquemine, Louisiana: Mrs. Shirley.

My mom (Mrs. Gwen) came to visit this weekend and we had the most awesome time. We mostly just talked a lot, which was great. She came to church with me this morning, then we went to see On Agate Hill, a one-woman play starring Barbara Bates Smith, based on Lee Smith's novel of the same name. It was wonderful. I gave Mrs. Gwen a signed copy of the novel for Christmas last year, but she hadn't read it yet. But that didn't matter; Barbara picked and chose the scenes, and worked everything out in such a way that even those who hadn't read the novel could understand what was going on. Mrs. Gwen was crying in the end. It was a wonderful play. Absolutely wonderful.

Then, after Mrs. Gwen left, I went home and took a nap. I've never been a napper, ever, but now that I've officially entered my late 30s (I turned 37 and a half yesterday), I've suddenly started needing afternoon naps. I only get them on the weekend, but I get them every weekend. So I now take naps. What's with that?

Then I went running around Lake Junaluska. Yesterday's early-morning long run never happened, so I did my long run this evening: nine miles. It was an amazing run. (I just accidentally typed "fun" instead of "run." Hmm.)

As I made my second swing around the lake (about mile 6), I heard the most amazing music. I stopped and turned and went toward the direction of the music. Turns out the Junaluska Singers were performing for an Elderhostel event. I listened for a while to "When the Saints Go Marching In," "I'll Fly Away," and "Power in the Blood," then I tore myself away to finish up the run. I ran a little faster than I probably should have, then sprinted the final half-mile back to where the Junaluska Singers were performing.

The windows of the theater were open, and several people were sitting outside, listening to the singing. It was amazing. I looked rather uncouth, I must admit; my mouth was wide open. If my jaw could have dropped to the ground, it would have. I was seriously impressed. Mrs. Shirley, next time you plan to come up here, you need to (1) let me know you're going to be here!, and (2) plan to come up when you can see the Junaluska Singers. That was some of the best gospel music I've heard in a long time.

So then I came home to find that my piano teacher, Deborah, had left a message on my machine. I called her back reluctantly; I was anticipating telling her that I'd have to quit piano. Not because I wanted to, of course; it's just that my schedule, and the long drive to Asheville (it's a 2-hour drive from my new job to her house), piano lessons weren't going to be feasible.

Well, I think we worked something out. I won't have a lesson every week, but I'll have one a couple of times a month. So we're both happy. And maybe Johann Sebastian Bach is smiling down on me, knowing that I'll continue learning his glorious music, despite the challenges of keeping up lessons.

So, that's the news from my corner of the mountains, Mrs. Shirley. Thanks for reading!
at August 19, 2007 3 comments:

Here's my friend and editee, author Jan "LiteShoe" Leitschuh, at the Long Trail Festival this weekend in Rutland, Vermont, at her very first book signing. Does she look happy or what? 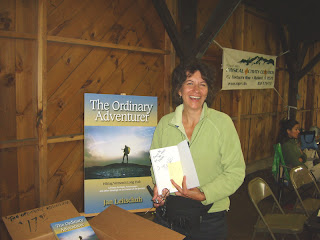 I Love, Therefore I Vacuum

I am such a little wifey.

After "dinner," I looked around and noticed that the carpet was buried beneath about a centimeter of cat hair.

I don't usually notice these things. I have to remind myself to vacuum. Every time.

I don't dislike vacuuming the same way I dislike, say, scrubbing the bathtub. But vacuuming certainly isn't high on my list of things I enjoy. Even if I made a list of housekeeping chores I like from most to least, vacuuming would fall on the "least" side of the spectrum. In order to vacuum, I have to pick up everything that's lying randomly on the floor. And then I have to organize and put away the things I pick up. And then there's the vacuum cleaner. It's as tall as I am. And I hate having to carry it up the steps. Whine, whine, whine.

Hubster is home from camp, but he had a business trip this week and will be home tonight for the first time in three days.

Hubster notices cat-hairy carpets. They stress him out. Few things in this world stress my laid-back Hubster out, but, unfortunately, cat-hairy carpets is one of the few. Hub often ends up vacuuming because he simply can't stand to for our dark green carpets to take on the sickly, wispy, wavy greenish-grey look rendered by days of cat-shedding.

I vacuumed my little heart out. Not because I wanted to. Not because I really care at all about whether or not our carpet is infested with a gazillion microscopic nasties. I vacuumed because I love the Hubster and I know he'll be happy to see a clean carpet when he gets home.

I know what you're thinking. "Waterfall sure loves her husband, but she is one lazy wife when it comes to vacuuming."

I Love Having a Job

I'm a writer. When you're a writer, you make lots of money some years and next to nothing in other years.

The last few years have been next-to-nothing years. I have a lot to show for it--Jan's book is published, and our county far surpassed its Relay For Life goal for 2007, raising over $170,000, thanks in part to my publicity efforts. I have copies of a newspaper issue in which cancer survivors--and those who have suffered the loss of loved ones through cancer--are honored.

I made next to nothing while teaching, but because of that year at school, a small group of students are a little bit better at reading and writing than they might otherwise have been. And I don't think I'm being presumptuous in saying that some of them will have lifelong memories of their high school English class with me. (Some of those lifelong memories may not be good memories, but that's beside the point!)

In short, I have been able to use my writing and teaching skills to, as the cliche goes, make the world a better place. And I find great joy in that.

But ... I sure do love getting a paycheck.

We've been able to give a lot more money to our church.

We've been able to give money to causes we've wanted to support in the past, but haven't been able to.

We aren't able to do this simply because I got a job. We've been living on a shoestring for the longest time in the effort to pay off credit card debts and other loans.

We're almost there. God willing, we'll owe no more on the credit card after another month or so. The only "credit" we'll have is our house payment.

We are richly blessed. God is good. Life isn't perfect, but life is a lot easier when money ceases to be a major stressor.

Email ThisBlogThis!Share to TwitterShare to FacebookShare to Pinterest
Labels: work

I told people that Jan's book would be worth the wait ... and it is!

Click here, then scroll down and click Reviews to read some of the early feedback Jan's gotten on her book, The Ordinary Adventurer: Hiking Vermont's Long Trail: A Primer for Baby Adventurers, and Other Musings on the Nature of the Journey.

This is the book I edited, for anyone who remembers my constant references to "Jan's book" over the past year.

I've spent some quality time with my own novel lately, but not nearly enough. I've been spending more of my time revamping my company's user manual and writing pages and pages of internal documentation. It's been challenging and fun, and I'm learning loads of new information. I can't believe I've already been at this job for more than two months.