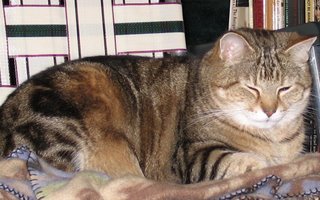 Once a year, I have to take Beau the Cat to the vet for his shots. I dread this adventure. Beau weighs twenty pounds and has some bobcat in him. His teeth are huge. His claws are huge. He can be vicious and mean. And he hates the vet.

I'd gotten a sleepy pill for him yesterday, so this morning we crumbled it and disguised it in a bowl of "magic tuna." He ate about half the tuna before he realized we were trying to pull a fast one over him. He's too smart for that. He rubbed his paw all around the bowl, as if he were covering up poop. That's his way of saying, "I'm not eating this s***."

With much physical effort but no loss of blood, Hubster and I managed to wrangle Beau into the Furrari (his big cat carrier). Hubster went on to work while Beau and I went to the vet. Of course, Beau cried pitifully the whole way there. It breaks my heart, to hear him cry like that. Big, tough kitty that he is, crying like a little hurt kitten.

Once at the vet and in the examination room, we all realized that Beau hadn't eaten enough "magic tuna" to render him docile. The doc gave him a "magic shot" to calm him down and left the room, saying he'd give the shot some time to kick in before he worked on Beau.

So Beau, crying, is wobbling all over the place with his eyes crossed. I felt like a horrible mother. My poor child. He wobbled onto my lap and I held him, petting him. Then, suddenly, he hissed and swiped at me. Drew blood. I should have known blood would be involved in our annual trip to the vet. It always is.

The vet was able to give him his shots, but he couldn't give him a physical exam. Even when drunk off his tail, Beau can be vicious, and he wasn't about to let some vet clean his big, beautiful teeth.

So we're home now. I'm exhausted and poor, wobbly, cross-eyed Beau has retired to his favorite cardboard box. I feel so bad for the little fella. But I'm really glad we got the dreaded annual vet-visit over with today. He's safe from rabies, feline leukemia, and all the other nasties for another year now.
at August 15, 2006