My New Bach is Here!

It arrived at Deborah's a couple of days ago. And now it's mine. 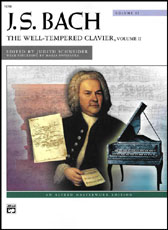 It's my big book of the Well-Tempered Clavier, Vol. 1. (Ignore the fact that the picture to your right is of Vo. 2.) In it is, officially, the first prelude and fugue that I will ever learn. I say "officially" because I've learned bits and pieces of the "WTC 1" in the past, but never formally, and never completely.

The WTC is another one of those things that I should have started working on in late high school or college, but I was anti-Bach at the time and refused to learn anything by him. It's probably better this way; I find that I'm a better pianist, and that I learn music more thoroughly, now that I'm an adult. So it was probably meant to be.

I'll be learning Prelude and Fugue No. 3 in C# Major. As we looked briefly over the music yesterday, I asked Deborah, "Are you sure this isn't too hard for me?" She felt confident that it wasn't. Still, I'm a little intimidated, as it has seven sharps and lots of ... well, notes. Lots of notes. Not too many notes (this is Bach), but a lot of them.

I'll be posting on my process of learning this "P&F." It will be a slow process, but I think it's going to be an intellectually challenging and fulfilling process as well.