My friend Ed "Not to Worry" Speer and I celebrated our combined 95th birthday at Hot Springs (NC) Campground this weekend. We had snow and freezing rain--typical of our occasional Hot Springs gatherings! Here are a few pictures ...

Not to Worry and POG sitting at the campfire. Not to Worry, of course, is the birthday boy, and he and his lady-friend POG (his POG-friend?) were responsible for making it such a great weekend. 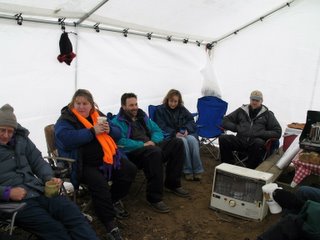 While it snowed outside, we huddled around the heaters inside Mr. Worry's tent. These folks are, from left to right, Not to Worry, POG, POG's brother Brian, and Betsy and Michael, whom I'd never met before this weekend. Is that a giant flying mouse getting ready to attack POG from above? 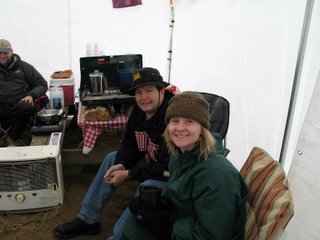 Here I am with John G. Young, one of Hubster's Rowdy Friends. 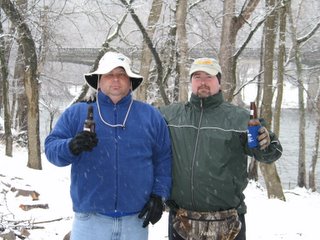 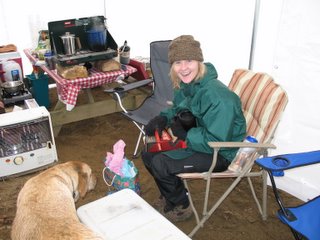 Analisa and Pat gave me a travel edition of ScrabbleTM for my birthday. As you can see, I liked it! Springer the dog lost interest when he realized it wasn't food. We played in the tent, and it was so cold that we had trouble snapping the letters into place. 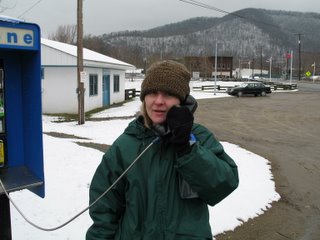 I called my sister and brother, who had said they would be there this weekend. They weren't able to come because of the weather. That's why I look so sad in this picture. 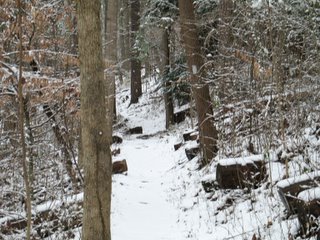 Hubster and I got away for a little while and took a short hike on the Appalachian Trail south of town. 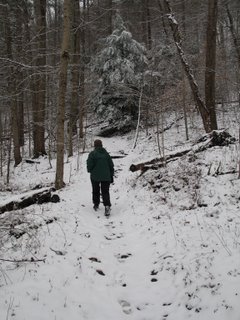 If I'd kept walking, I would have arrived at Springer Mountain in Georgia after a while.