A Little Bit About Tintern Abbey

Tintern was a Cistercian abbey and is among the most well-known of the monastic ruins of Britain. Founded in 1131 on the Welsh border, it was the second Cistercian foundation in Britain. It grew over the next 400 years, but eventually saw its dissolution in 1536, a result of King Henry VIII's policies and efforts to control the church in England. Tintern Abbey was one of some 800 religious houses that were destroyed between 1536 and 1540.

Today, it is among the most complete monastery ruins in Britain (the present remains date from the late 13th century). Many folks know it as the view in Wordworth's famous poem, while others know it from J.M.W. Turner's paintings (see below). 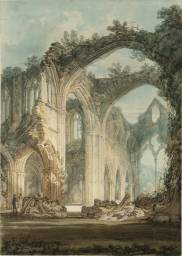 Of course, my knowledge of the abbey was through Wordsworth's poem. As I've mentioned in previous posts, I was very into Wordsworth's poetry when in college. So, when I spent a summer studying at Oxford in 1991, I insisted to my classmates that, on a weekend trip to the Welsh border, we visit Tintern Abbey.

Here are some pictures of what happens when wild and crazy Protestant kids visit ancient Catholic ruins.

Rachel, Rusty, and Peemeister impersonate the abbey in front of the visitor center/gift shop. 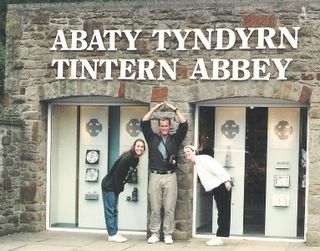 Waterfall, Rachel, Peemeister, David, and Rusty pose in the ruins. 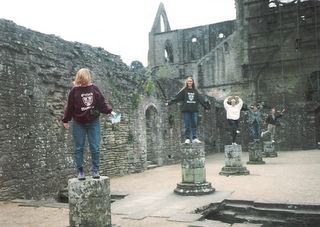