Franz Joseph Haydn was born on this day in 1732 the son of a wheelwright in Rohrau, a village in lower Austria near the border of Hungary. 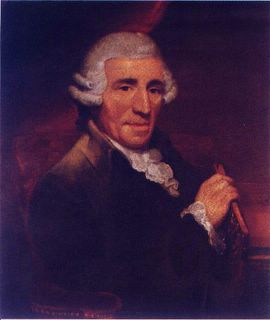 Or was he born on April 1? That's what it says in the birth-register in Rohrau. Haydn is said to have declared, "I was born on 1 April, and that is the date found in my father's Hausbuch - but my brother Michael maintains I was born on the 31st of March because he doesn't want it said that I came into the world as an April fool."

Regardless, I say we begin celebrating Haydn's birthday, his life, and his music TODAY. And we can keep celebrating tomorrow if we so please.

Although Haydn was a contemporary of Mozart's (OK, he was more than 20 years older, but they were still contemporaries), he didn't have the musical upbringing of the kind that Leopold Mozart could provide. Haydn's father, Matthias, could not read music. He loved music, though, and played the harp. His son seemed to love music as well, and it was discovered that he had a good singing voice.

By 1740, Joseph Haydn found himself at St. Stephen's Cathedral in Vienna, where he would remain a chorister for nine years. Although the musical resources in Vienna were many, Joseph never had what he called a "proper teacher" and was largely self-educated in singing, playing instruments, and composition.

Haydn's voice eventually deepened, and he was forced to leave the choir. This was unfortunate, as the church was his livelihood, but it wasn't as unfortunate as what almost became his fate. He had such a beautiful voice that he was actually scheduled for castration, so that he could keep that voice as a castrato.

So, to our eternal gratitude, Haydn took the route of composer rather than castrato. He spent the bulk of his life employed by the Esterhazy family, teaching, composing, conducting, and continually educating himself in the art of composition. Because the Esterhazy palace was an isolated place, Haydn felt forced to resort to his own wellspring of creativity.

"My Prince [Nicholas Esterhazy I] was always satisfied with my works: I not only had the encouragement of constant approval but as conductor of the orchestra, I could make experiments, observe what produced an effect and what weakened it, and was thus in a position to improve, alter and make additions or omissions, and be as bold as I pleased. I was cut off from the world, there was no-one to confuse or torment me and I was forced to become original". --Franz Joseph Haydn

Ultimately, Haydn's compositions included 104 symphonies, more than 90 string quartets, 32 piano trios, 62 piano sonatas, and the major choral works The Creation and The Seasons. He lived a long life, dying at the age of 77 in 1809--nearly 20 years after Mozart's death.

Haydn seems to me to be among the most underrated classical composers. His music seems overshadowed by that of the younger Mozart (who happened to be Haydn's friend and respected colleague), and it shouldn't be. Although many influences went into the classical style, Haydn was pretty much the creator of what we consider the classical style today. And his symphonies are delightful. I'll post some links to listening samples if I can find some good ones.

Meanwhile, he's a nice sample of the first movement of Haydn's Sonata in E-flat (Hob.XV/52). Or go to this page of the Internet Piano Page to select other movements of same sonata.

Update: A quick search of my personal blogosphere yielded a more thorough Haydn post written by Michael Blowhard. Go read it. It's what I wanted to write, but couldn't on this busy day in Cubicle Land. Michael also points to an essay on Haydn written by the Honorable Terry Teachout in Commentary magazine. (Unfortunately, Teachout's article is in the digital archives and is not available unless you've subscribed to Commentary.)

Note: Many thanks to Lynn S. for correcting my glaring error of using the plural castrati when I should've used the singular castrato. Silly me ... I didn't even think about that. I'll punish myself tonight by allowing myself only one spaghetto for dinner.
at March 31, 2005

Unique blog my friend, I can hardly wait to vist
this site again. I just worship the site its comes
from! Believe me in my extra time I'm consistently
looking up blogs like this.
You must peep out my pr puerto rico house cleaning blog.