Music, this marvelous universal language understood by everyone everywhere, ought to be a source of better communication among men. -- Pablo Casals 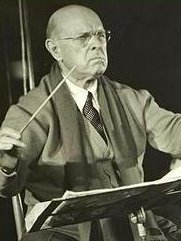 Pau Casals i Defilló, commonly known as Pablo Casals (1876-1973), was born in Spain and was a famous virtuoso cellist and conductor. Of his many performances, he is best known for his late 1930s recording of Bach’s cello suites. In fact, Casals was largely responsible for the resurrection of the six cello suites, which had existed in obscurity until Casals happened upon them as a boy. The following excerpt, from an essay on Casals from Classical Notes, tells the story.

Casals landed his first professional job at the Café Tost in Barcelona. Soon he began to devote one night each week to classical music, to which he was becoming increasingly attracted. […]

During his stint at the café, an event occurred that would transform not only his own life but the entire course of music appreciation. During one of his father's visits, they stopped in an old shop in search of scores to expand the repertoire for his classical nights. As Casals later recalled in a 1970 memoir, he "came upon a sheaf of pages crumbled and discolored with age" – the six unaccompanied cello suites by Bach, written around 1720 and completely forgotten – Casals' music teachers hadn't even heard of them. Casals was staggered by the "magic and mystery" of such rich writing for his instrument.

“All I could do was stare at the pages and caress them. ... I hurried home, clutching the suites as if they were the crown jewels. ... I read and reread them. I was thirteen at the time, but for the following eighty years the wonder of my discovery has continued to grow on me. Those suites opened up a whole new world. I began playing them with indescribable excitement. They became my most cherished music. I studied and worked at them every day for the next twelve years.”

Once Casals did begin to play the Suites in public he launched a full-scale reassessment of Bach. Although they had previously been dismissed as cold, academic exercises, Casals plumbed their depths and poured out radiant poetry.

Casals cut the Suites in four sessions from 1936 to 1939. [These recordings] remain one of the touchstones of recording. Although he had been playing the music for nearly a half-century and was at the height of his powers, his renditions at first can disappoint, as they seem full of "errors." Rather, Casals paints a complex and intensely human portrait of Bach, flaws and all, enlivened with a huge variety of tone, volume, rhythm, tempo and expression, ranging from hushed, pensive probity to rough, lusty vigor.

Following are a few more of Casals’ quotes on Bach.

Bach is the supreme genius of music... This man, who knows everything and feels everything, cannot write one note, however unimportant it may appear, which is anything but transcendent. He has reached the heart of every noble thought, and has done it in the most perfect way.

The greatest gypsy violinist of the era played the adagio from Bach's G minor Solo Sonata. It was the most fiery, the freest Bach I have ever heard. Also the best. This gypsy had none of our fears and inhibitions about what to do or not do in Bach. He played uncensored, from the heart.

Put aside convention and play as I believe Bach himself played, with great freedom. Play uncensored, from the heart.

And my favorite, from when Casals was in his early 90s:

For the past eighty years I have started each day in the same manner. It is not a mechanical routine but something essential to my daily life. I go to the piano, and I play two preludes and fugues of Bach. I cannot think of doing otherwise. It is a sort of benediction on the house. But that is not its only meaning for me. It is a rediscovery of the world of which I have the joy of being a part. It fills me with awareness of the wonder of life, with the feeling of the incredible marvel of being a human being. The music is never the same for me, never. Each day it is something new, fantastic and unbelievable. That is Bach, like nature, a miracle!

Pei Yun: It was pretty educational for me, too. Amazing the things you can learn from a bit of rummaging through the internet.

Well said, Mr. Casals, you understood Johann Sebastian Bach better than anyone else.