Another Plunge into Music History

Lully was born Giovanni Battista Lulli in Italy, but he made his career in France and became a naturalized Frenchman. 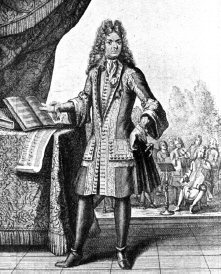 Lully, who served in the French court as Louis XIV's compositeur de la musique instrumentale, was ultimately to control all music and musical performances as surintendant de la musique et compositeur de la musique de la chambre and maître de la musique de la famille royale for the Sun King. A famed dancer, mime, comedian and composer, Lully was the father of French opera, working with such names as Moliere and Quinault to produce both comic and tragic operas that included a good dose of dancing--the French royal preoccupation. He was also a major figure in the development of the French Overture, which was characterized by slow, dotted rhythms (ta-DUMMM .... ta-DUMMM ... etc.). The French Overture style became a regular tool for Baroque composers, including those outside France, such as Bach and Handel (think of the opening overture of Handel's Messiah).

Lully was a pretty fascinating and accomplished man. He composed, produced, and conducted approximately 20 operas and ballets (including training and coaching the singers and dancers). He introduced professional female dancers into the ballet, and he was responsible for the popularization of French opera across Europe in the 17th century.

Lully, who used a heavy cane to beat time for music when conducting, died under unusual and unfortunate circumstances. In January of 1687, while conducting his Te Deum (performed to celebrate the king's recovery from an operation), he accidentally injured his foot with the cane as he was beating time. The wound developed into an abscess, and gangrene set in. Less than three months later, he was dead.

Poor Lully. As Robert Greenberg says in one (several?) of his music theory lectures, for all Lully's accomplishments and importance in his day, he's since been flushed down the toilet of time.

Folks, in memory of Lully, I move that we dig out and dust off our auditory toilet plungers today, on the anniversary of his death. Listen to some samples of Lully's music here.

Also, for anyone who is interested, here is a brief history of French opera and the vital role that Lully played in its development. (Warning: lots of pop-ups at this site.)
at March 22, 2005