A reader has commented on my naming of my piano "George." In case you were wondering, I’ll give you a brief account of how George got his name.

The Naming of the Little People: I would name other imaginary people as well. We had about 20 Fisher-Price “Little People,” and I named all of them. How did I remember their names? I got on my mom’s Selectric typewriter when I was about five and typed all of the names. Cut them out into little squares and taped each one to a little wooden body. Kept the names there until my sister and I had them memorized. 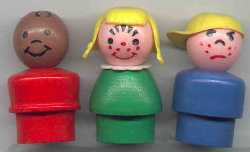 And when my sister sees it, she’ll think to herself, “That’s Art, Mary, and George!” (Hm, another George ... no relation to the piano, though.)

The Naming of the Teams: My poor sister. Of we three siblings, she was the natural athlete. We’d play softball together, she and I. But of course, two people weren’t enough, so I would have to (1) name the teams in the league, (2) make up names for all of the team members, (3) assign their positions and batting order, and (4) draw up a schedule showing who would play whom, and when. By the time I was ready to play, my sister would have spent a good hour amusing herself, throwing the softball into the air and catching it in her glove.

I did teach her how to pitch, though.

The Naming of the Ford Tempo: I’ve always named my cars, too. In college, I drove a used Ford Tempo. I originally named it “Allegro,” since allegro is a nice, brisk tempo in music—not too fast, not too slow. Well, my college was located on a steep hill, and that poor Tempo slowed to a crawl whenever it had to go uphill. So I renamed it Largo.

The Naming of George: Anyway, back to George. George wasn’t named after anyone in particular. I think I must have been five when I named him. And I don’t know why I imagined the piano to be a “him” rather than a “her” or an “it.”

Remember the Warner Brothers cartoon where the Abominable Snowman finds Bugs Bunny and says, “"I will love him and hug him and pet him and squeeze him and I will call him George”?

Welp, that’s where I got it from. One day, when I was five or six years old, I looked at the little Kimball Console in our living room and thought to myself, “I love him. I will call him George.”

And that’s how George got his name.

Update: I just heard from my sister, who e-mailed me after reading this post. She writes, "That is so funny because I have been telling the ____s (her boyfriend's parents) about mimi's (her name for Fisher-Price Little People), and their names because she has been pulling them out for the grandchild. I have been telling her who she has found!"

Ah yes, that's my little sister. Not only did she put up with my chronic naming of things, but she remembers all of the names, 25 years later.

Somehow that all seems a lot more wholesome than me calling my trumpet Ol' Out of Tune Bastard! I see though that Ol' George has had his own problems with, uhh, functioning. That happens to us men as we get older. BTW I live near Charlotte and I envy anyone who lives in Asheville...what a pretty place.

Ha, I guess so! I do love living in Asheville, even though it's too cold for this Louisiana transplant. The mountains are beautiful and, being a hiker, I love that. We do head over to Charlotte every now and then because we have friends in Rock Hill.

Yes, poor George is getting old and rickety and isn't quite the man he used to be. Hopefully the piano doctor (a.k.a. tuner) will be able to give him something for that!

And brass instruments can have names, too. I knew a guy who hiked the entire Appalachian Trail with his tuba, whom he named "Charisma." I thought that was a good name for such an attention-getting "hiking partner." :-)

I named all my barbie dolls. I had quite a collection. But I added them one at a time, so it was easy to remember them. Never named my cars, though.

I have a girlfriend who has 4 children. When they get into trouble, instead of struggling to remember their name she says "Which one are you?" LOL ... cracks me up every time.