Well, folks, I met with my bride last night. She and her fiance are getting married in July, and Yours Truly is the ceremony pianist.

This will be the first full wedding I've ever played, and the first wedding I've ever been paid for. I warned her that she's hiring non-professional, but she said that was OK. So we met last night to discuss the music selections and make music-related plans.

It was so much fun! I loved recommending things! There are a few things she wants that I've never played, but they should be easy enough to learn.

Except for the fight song.

That's right, folks. I'm to play the fight song of the groom's alma mater as he and the groomsmen enter the church. 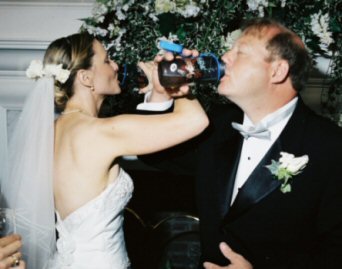 Has anyone ever heard a college fight song played as part of a wedding ceremony? On the piano? Just curious. I might need to make a deal with the "Trumpet Voluntary" trumpeter at some point ...

And wonder ... is it good to have a "fight" song played at the starting point of one's marriage?

Should we have more of a "love" song instead?

Any opinions? You can listen to my favorite fight song while pondering.

(Warning: Displaced Louisianians may suffer severe symptoms of homesickness while playing this song. Listen at your own risk.)
at February 25, 2005

i have never hear of anything like this, but i think if it's what they want that it's a great idea!!!! it will be memorable and personal. think of it more as a spirit song or a pep song...getting them ready for the hard work a marriage takes to last!!!!!

That's too funny! Certainly creative to say the least.

Excellent blog.  I go though the web in search of
blogs like this one. Its so good, that I plan on
returning to its site!
Stop by and look at my car donation hawaii blog site.

Fine blog. I found your site suitable for another
visit! And when I'm able to surf the web, I look for
blogs as great as your work.
Hey playa! You need to check out my wa washington house cleaning blog.