Today is the birthday of Sam Waterston, a.k.a. "Jack McCoy" on Law and Order. 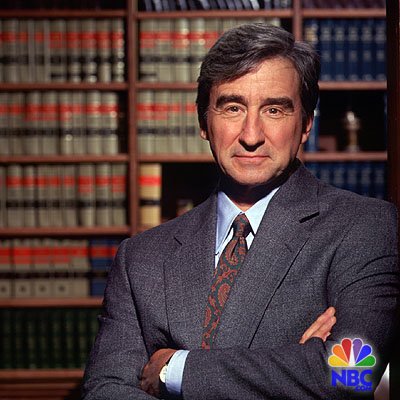 Sam Waterston was born in 1940 in Cambridge, Massachusetts, which makes him a big 64-year-old today. Of course, he'd still be 64, no matter where he was born. Anyway, Dan and I love Jack. He is one of our favorite imaginary people. Lots of other people love Jack, too. Someone out there in Internet Land even created a page devoted to him, The Raised Eyebrow.

I'm not the fan club type. I joined the John Denver fan club once, and he died tragically a month later. So I don't want to join any more fan clubs.

Whoo boy, it's Monday. Still waking up, even though I've been up since 5:00. I had a good weekend and want to bore my readers with a play-by-play, so I'll definitely write mo' later.